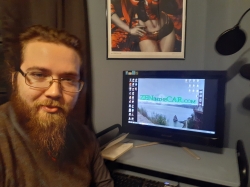 A Reading of Tea & Zen

“Writing is hard,” the man slumped over his desk. Clearly out of sorts from overthinking something so simple. Why would a simple article be difficult to write? It’s not as if writing is new. Perhaps the forum in which this newly inducted writer has joined is the problem weighing on his mind.
He tapped multiple different introductions, and none of them felt correct. However this article would not be graded, merely perused by fellow writers and readers. That would be issue it seems. The writer repeatedly glanced back over to a personal chat with a friend to distract himself from the thoughts becoming too intrusive. Not that it really mattered. Even they were pushing him to write more.
A thought slowly crawled into the writer’s head, “reread some old stories that felt more your style to feel back how you wrote.” The old writings proved to be both a great idea and mild cringe worthy. The early adult writings of a man growing out of teenage dreams and more into a jaded adult held merit of style but not even close to subject matter. The mild existential crisis of aging and realizing that independence means far more than just buying groceries alone really felt like a gripping topic back then.
The writer shook his head and went back to the kitchen to think more clearly. Maybe a hot drink would help. His mismatched socks kept him warm in the small two bedroom apartment. Heat was not as important as money for food after all. The cabinet was only so full. Several cans of soup, a few rows of vegetables, and an entire shelf dedicated to top ramen. The beautiful tea was stashed on the top shelf with two week old opened bag of chips and a still unopened bag of marshmallows. A box of Irish Breakfast half torn opened was easy access. The kettle filled with shitty tap water, perhaps the fluoride would help lower his brain functions enough to stop overthinking. Tea bags dangling into the massive mug with a picture of some obscure anime, while he scooped some sugar in. The kettle screaming for attention shook the writer from his zoning out. The world made sense again as the water poured into the mug. The aroma of deep black tea filled his mind reminding him of a better time.
While the thoughts flooded his mind, the writer quickly got to work again. Hot tea was definitely the key to writing again. The sounds of the keyboard starting to click timed with is own thoughts. The concern for the individual was not important. The concern for the mass was not important. Writing was meant for no other purpose but the writer to feel accomplished in his message. Whether or not that message made sense was on the reader’s understanding.
The writer leaned back in his chair to reread his work. Taking a sip of the now tannin infused tea made for an interesting mix, the sweet success of finishing his work with the bitter taste in his mouth. Did it really matter though? Tea, much like writing, has an art form that helps individuals. In this scenario for a change, both tea and writing helped this young writer.
“Writing is easy,” the man slumped over his desk once more.

ZEN IN THE CAR PODCAST!

Zen in Your Box!

IT GOOD FOR YOU!

You are now a Zenner, saved by grace. Neat.